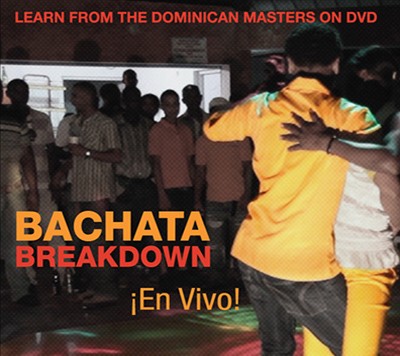 Joan Soriano and the masters that record with Romeo Santos, Aventura & Monchy y Alexandra present a DVD breakdown of the essentials of bachata, instrument by instrument.

Bachata Breakdown En Vivo DVD is available now. Please email sales@iasorecords.com for information on how to order it.

Bachata is in 4/4 time – which means it has four principle beats to every measure.

Musically, bachata can be divided in three core rhythms: Derecho, Majao, and Mambo. Within each of the core rhythms, every instrument plays a designated pattern .

Derecho is the most basic rhythm of bachata. It is played in instrumental introductions and in the verses to accompany the singing. Derecho closely resembles bolero – one of the musical styles from which bachata has evolved.

In derecho, the bongó emphasizes beats 1,3, 4. Beats 1 and 3 are high hits, and beat 4 is a heavier hit on the low drum. The low hit on four prepares the listener for the start of the next measure. The bongó also plays on 2 and on all the syncopated upbeats, but these hits are lighter and less audible. The basic derecho bongó pattern is the same basic pattern as is played by the bongó in bolero and in son.

In derecho, the güira plays short strikes on all 4 principle beats as well as the syncopated upbeats between them. Güira strikes land equally on: 1, 1and, 2, 2and, 3, 3and, 4, 4and. The güira acts as the principle time keeper in derecho, but does not give many queues as to where it is within the measure.

In derecho, the bass plays on 1, 2and, 3, 4. The first note on 1 sustains for 1 ½ beats. The note on 2and lasts only half a beat and acts as a pickup for the notes on 3 and 4, which each last 1 beat. Beats 1 and 3 (aka the downbeats) receive the most emphasis. This is the same basic rhythm that is played by the bass in bolero.

In derecho, what the requinto plays can vary greatly depending on where it is in the song. In the instrumental intros, the requinto will play a melody that is often loosely based on the singer’s melody in the verse. The melody played by the requinto in this section identifies the song to the listener before the singer has even begun to sing. The requinto plays a more distinct pattern in the verses. It has a string pluck on every beat and upbeat – so as with the güira and rhythm guitar is plays 8 times in a measure. The most common pattern would be descending from low notes to high in a chord, in two groups of three and then a group of 2 (total 8). In other words, it arpeggiates a chord: low, mid, high, low, mid, high, low, high. This pattern is unique to bachata – in bolero the requinto does not do this.

When a bachata is in the majao section, the rhythmic aspects of the music generally receive more emphasis. This can result in the music feeling more lively – especially from a dancer’s perspective. For instance, a couple dancing in closed position during derecho might separate into open position in majao.

Majao is usually played during choruses and also in instrumental sections when the requinto is playing mid-tempo rhythmic patterns (grooves). Musically, majao is characterized by more sparse playing by the bongó and güira – with greater emphasis on the downbeat – balanced by a fuller, more syncopated bass line.

in majao, the bongó stops playing all upbeats, instead playing only each of the 4 principle beats: 1, 2, 3, 4. The first 3 beats are all played on the high bongó, with the bongó now emphasizing beat 2 equally with beats 1 and 3. Beat 4 remains on the low drum, unchanged from derecho.

in majao, the güira drops the upbeats and plays a slightly longer scrape on 1,2,3,4.

in majao, the bass plays on: 1, 2, 2and, 4, 4and. The change from derecho is dramatic. Beat 3 is no longer played on. The most emphasized notes in majao are 1, 2and. The 2and note sustains for 1 ½ beats – giving a particularly heavy accent to the syncopated upbeat. In the majao sections that accompany choruses or hooks, the bass and rhythm guitar often will continue to play in derecho, despite the bongó and güira changing to majao.

in majao, the rhythm guitar also transforms dramatically. The bass note on 1 is dropped entirely, and the strum on 4and is allowed to sustain across beat 1 to 1and. The strum on 2 is also dropped, and so the strum on 1and is allowed to sustain across to until 2and. The two most emphasized and sustained beats thus are: 4and, 1and. The rhythm guitar still plays bass notes on 3, 4. It strums on 2and, 3and, 4and, 1and – with the strums on 4and, 2and being more sustained because they are not immediately muffled by the wrist and followed by a bass note. The rhythm guitar will also sometimes play a pickup 16th note strum before the strum on 1and. In the majao sections that accompany choruses or hooks, the bass and rhythm guitar often will continue to play in derecho, despite the bongó and güira changing to majao.

Mambo is the most energetic part of bachata’s instrumental section. It is played during instrumental interludes to accompany the requinto’s most heated grooves (the requinto’s grooves are also called mambos). Mambo is never played while the singer is singing.

Mambo rhythmically shares many similarities to merengue. The güira plays a merengue pattern. The bongó parts are derived from tambora merengue patterns. The bass and rhythm guitar also often play parts resembling what they play in merengue.

Like bachata, merengue also originates from the Dominican Republic. It evolved long before bachata separated from bolero. Early bachata bands would play guitar merengues alongside early bachata-boleros. As they sought to make bolero more lively and uptempo, they naturally began to incorporate merengue sections into their bolero-bachatas.

The tempo in mambo might also accelerate slightly in live performance. These days in recorded bachata the tempo is usually constrained by a metronome, and so does not change – even slightly – anywhere in the song! iASO’s recordings are the exception: they are always live in studio performances without a metronome.

Mambo is the section of bachata where the instrumentalists are most free to improvise. It is therefore difficult to pin down exactly what each instrument plays in mambo. Mambo is identified more by the over-all feeling and accent rather than by any specific pattern. The exception is the güira – which maintains a defined mambo pattern.

there are a variety of rhythms that the bongó can play in mambo. Each bongó player can invent his own variations. Often, a bongó player will choose a variation that syncopates with the Requinto’s mambo groove. What the mambo bongó variations generally have in common is that they resemble merengue. The bongó is never actually played in true merengue. A different kind of drum – the tambora – is the principle drum used in merengue. Congas are also sometimes used. The bongó’s mambo rhythms typically continue to play a low drum hit on 4 and an emphasized high drum hit on 1. They sometimes also add a low drum beat on 3. Sometimes they will have a low drum role between 4 and 1 – similar to the drum roll that exists in that section of merengue. See the Bachata Breakdown En Vivo DVD for examples of bongó mambo patterns.

in mambo, the güira plays the same pattern as it would play in merengue or son: 1, 2, 2and, 3, 4, 4and. The effect is two groups of three notes, the first beginning on 4 and completing on 1, and the second beginning on 2 and completing on three. In other words, the rhythm might better be perceived as 4,4and,1 … 2, 2and, 3. As there is a half-beat rest on 1and, 3and, the downbeats 1,3 sound emphasized.

in mambo, the bass often plays a slight variation on the majao pattern – sometimes it even will continue with the majao pattern unchanged. But mambo is an improvised section and the bass player can invent almost any groove in this section. The bass often responds to and syncopates against the bongó player’s rhythm. Sometimes the bass will simply play short stacatto down beats with a pickup note on 4and – similar to what is often played in basic merengue.

The rhythm guitar may also use majao as a starting point for mambo, but will often drop down-beat notes and play a sparser – more syncopated rhythm. The rhythm guitar player will usually not play any bass notes in mambo.

It is the requinto player that leads the group into mambo – signaling the shift from majao with a change to a higher velocity groove. These grooves are often personal inventions of the requinto player – and help to identify that guitarist to connoisseurs .

Video demonstrations of what each instrument plays in each pattern – and how it all fits together – are all part of the Bachata Breakdown En Vivo DVD.

I'll be on the lookout Bill! btw - the traditional bachatas on Bachata Roja don't generally have majao and mambo sections - the style was still evolving back then

thanks for this - just the other day i stopped jumping around the kitchen and started really listening to how these songs are put together. watch out for mandolin bachata!

Looking forward to this!!