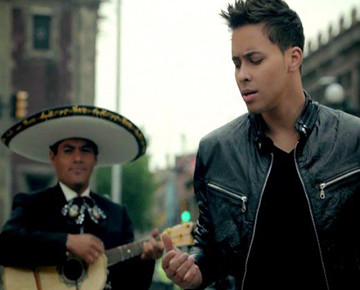 The frontier bachateros, with Antony Santos at their head, continued to enjoy success throughout the 1990s, and bachata continued to become both simpler and more romantic than it had been previously. The music’s audience grew as well, and with each step towards a larger market the genre moved away from the cabaret and doble sentido styles which had been so important in consolidating it. It was probably with Teodoro Reyes’ album, “El Cieguito Sabio”, in 1992, that the Dominican middle class began to accept genuine (as opposed to “tecno-“) bachata as its own, both in the Dominican Republic and in New York. Reyes had been singing and composing bachata for many years, and had written some of the most brazen doble sentido songs ever recorded. The songs in “El Cieguito Sabio”, however, while certainly cabaret bachata in many cases, were romantic enough and melodic enough to touch a nerve in segments of society which had never before been willing to accept bachata. The style of the arrangements, too, continued the process of simplification which had begun with Blas Durán and continued through Antony Santos, Luis Vargas and Raulín Rodriguez. During the 1970s, the lead guitar in arrangements by Edilio Paredes and Augusto Santos had been busy answering the singer, echoing the singer, and indicating harmonic changes; Reyes’ arrangements were among the first to contain a simple, rhythmic arpeggio pattern while the singer was singing, a pattern which remains standard in bachata to this day. The requinto had become a percussion instrument.

In the middle of the 1990s bachata took another turn towards romanticism with the rise of Joe Veras. Veras sang in a soft voice which contrasted with the traditional, almost mournful style of singing bachata which had been popularized by Luis Segura. Veras is the author of the majority of his songs. His lyrics, while displaying the street savvy which bachateros had always laid claim to, were more carefully constructed and showed a more middle-class aesthetic. Veras’ style of playing the guitar also differed considerably from the frontier bachateros’ style, and in his third production his recording of Camilo Sesto’s “Necesito saber” demonstrated the importance of balada to Veras’ work.

With the influence of bachateros like Veras, bachata had become essentially a romantic music by the end of the 1990s. Many bachateros’ songs deal with one theme and one theme only—love, often unrequited. Two of the most successful interpreters of this style of bachata have been Frank Reyes and Zacarias Ferreira. Reyes has even recorded some of his songs as baladas, as have Antony Santosand Raulín Rodriguez, further obscuring the differences between the two genres. Bachata’s audience, however, continues to resist a direct fusion of bachata with balada, as evidenced by the extremely disappointing performance of Ferreira’s “Adios”, an album in which he attempted to dress bachata up with traditional balada adornments like a synthesized string section.