Orquesta or big band merengue became the merengue of choice for the urban Dominican middle and upper classes in the twentieth century. Although merengue had been played in upper class salons as early as the 1850s, moralists like then-president Ulises Espaillat succeeded in banning the dance from such locations only two decades later, causing the merengue to effectively die out in the cities. Still, it was kept alive by rural musicians such as accordionist/composer Nico Lora, and it began to reappear in towns of the Cibao during the 1910s.

During that decade, several composers, including Julio Alberto Hernández, Juan Espínola of La Vega and Juan Francisco García of Santiago, tried to resuscitate the dance by creating orchestrated, written scores based on folk merengue melodies. One of these was García's 1918 work titled "Ecos del Cibao." Composer Luis Alberti later reported that such pieces, especially the famous tune known as the Juangomero, were frequently played at the end of an evening's program that otherwise featured imported styles like waltzes, mazurkas, polkas, danzas, danzones, and one- and two-steps.

While these early efforts in orchestrated merengue generally succeeded only in scandalizing their audiences, the political changes that occurred in the Dominican Republic over the next few years made a resurgence of the merengue possible. The resented North American invasion of 1916 seems to have made the general public more disposed to support autochthonous rhythms over imported ones, though the raucous rural accordion sound was still unacceptable to high-society tastes. Nevertheless, when Rafael Leonidas Trujillo took power in 1930, he imposed the merengue upon all levels of society, some say as a form of punishment for the elites that had previously refused to accept him. The soon-to-be dictator must also have realized the symbolic power of the rural folk music and its potential for creating support among the masses, since he took accordionists with him around the Republic during his campaign tours from the very beginning.

Following his election, Trujillo ordered musicians to compose and perform numerous merengues extolling his supposed virtues and attractiveness to women. Luis Alberti and other popular bandleaders created a style of merengue more acceptable to the urban middle-class by making its instrumentation more similar to the big bands then popular in the United States, replacing the accordion with a large brass section but maintaining the tambora and güira as a rhythmic base. They also composed lyrics free of the rough language and double-entendres characterizing the folk style. The first merengue to attain success at all levels of society was Alberti's famous 1936 work, "Compadre Pedro Juan." This was actually a resetting of García's "Ecos," itself based on earlier folk melodies, and thus it upheld a long-standing tradition in merengue típico of creating songs by applying new words to recycled melodies. The new, popular-style merengue began to grow in quite different directions from its predecessor, merengue típico. It became ever more popular throughout the country through its promotion by Petán Trujillo, the dictator's brother, on his state-sponsored radio station, La Voz Dominicana. Musicians like Luis Senior and Pedro Pérez kept listeners interested by inventing new variations like the "bolemengue" and "jalemengue." 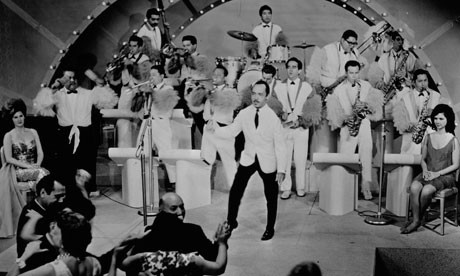 After Trujillo's assassination in 1961, the merengue orquesta underwent great change. During that decade, Johnny Ventura's Combo Show drove crowds wild with their showy choreography, slimmed-down brass section, and salsa influences. In the 1970s, Wilfrido Vargas speeded up the tempo and incorporated influences from disco and rock. (Today, the term "orquesta," simply meaning a large musical ensemble, is used to describe the pop merengue groups based on Ventura's and Vargas's models as well as the older Alberti style.) In addition, a new rhythm called "merengue a lo maco" appeared and was popularized by groups like Los Hermanos Rosario and Cheche Abreu. Far less complicated than other merengue rhythms, it was particularly useful for adapting songs from other styles like bachata, Colombian vallenato, Mexican rancheras, and North American pop. This process of remaking is called fusilamiento and continues to be a source for many merengue hits to this day.

Merengue has been heard in New York since the 1930s, when Eduardo Brito became the first to sing the Dominican national music there before going on to tour Spain. Salcedo-born, Julliard-educated Rafael Petitón Guzmán formed the first Dominican-led band in the city with his Orquesta Lira Dominicana, which played in all the popular ballrooms in the 1930s and 1940s, while at the same time Angel Viloria played popular tunes on accordion with his "conjunto típico cibaeño" for Big Apple fans. However, it wasn't until the massive migration of Dominicans in the 1960s and 1970s that the music reached a mass audience. In 1967, Joseíto Mateo, Alberto Beltrán, and Primitivo Santos took merengue to Madison Square Garden for the first time. Later, New York-based groups like La Gran Manzana and Milly, Jocelyn y los Vecinos, a group unusual for being fronted by women, gained a following in the diaspora as well as back on the island. 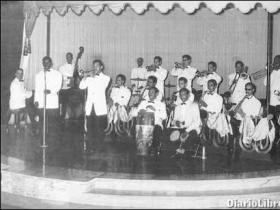 By the 1980s merengue was so big it was even beating out salsa on the airwaves. That decade was also notable for a boom in all-female orquestas, and Las Chicas del Can became particularly popular. Since then, musicians like Juan Luis Guerra, trained at Boston's Berklee school, and former rocker Luis Díaz have brought merengue even further abroad, truly internationalizing the music. Guerra collaborated with African guitarists, experimented with indigenous Caribbean sounds, and explored Dominican roots music with típico accordionist Francisco Ulloa, while Díaz (an innovator since his work with 1970s folklore group Convite) fused merengue, rock, merengue típico, and bachata in his productions.

In the 21st century, orquesta musicians began to voice concern that their style would be eclipsed in popularity by bachata and merengue típico. Perhaps for this reason, some pop merengue singers have gone to extreme lengths to attract attention, such as Tulile and Toño Rosario's excursions into women's wear. But even without such antics, recordings by groups like Los Toros Band, Rubby Pérez, Alex Bueno, Sergio Vargas, and the ever-popular Los Hermanos Rosario continue to sell well. Pop merengue also has a remarkably strong following on the neighboring island of Puerto Rico, which has produced its own stars, like Olga Tañón and Elvis Crespo.