With his accordion in hand and ingenious lyrics, Dionisio ‘Guandulito’ Mejia was able to charm his audiences and make his mark on the history of Dominican merengue. Known as ‘Guandulito’ for his green eyes, Mejia was born on March 23rd, 1911 in La Güizara, Higüey. When he was seven years old, he went to La Romana to live with his uncle Andres, who was a seasoned accordion player. Guandulito learned to play accordion under his uncle’s tutelage, and by the age of thirteen was performing frequently for local parties.

During his teenage years, Guandulito performed in and around La Romana, and toured across the eastern coast of the Dominican Republic. At the age of 20, he went to test his luck in the nation’s capital, where he supplemented his income by repairing accordions.

Guandulito’s merengues stood out because of his creative lyrics and witty on-stage antics, and he was known for his impeccable phrasing on the accordion. His songs often referred to his own life experiences. His wife, Jovinita Rivalde (with whom he had 10 children), features as a character in many of his songs. Guandulito recorded eight full-length albums and over 300 singles. His hits, ‘Jovinita’, ‘La cariñosa’, ‘El rebú’, and ‘El pájaro de agua’ among others, are now considered merengue tipico classics.

As with many musicians of his generation, Guandulito wrote songs in honor of Dominican president Rafael Trujillo. According to Guandulito himself, his merengues were so popular that Trujillo promised to buy him a house, but when the time came for the house to be delivered, Trujillo was murdered, and his promise unfulfilled.

Guandulito’s first recording was made sometime in the 1950s under contract with music impresario Bartolo Primero. “La voz Dominicana,” a national radio station run by Trujillo’s brother, also began to broadcast Guandulito’s live performances. Guandulito was among only a handful of Dominican musicians to record and receive regime patronage during the Trujillo era. In the 1950s, much of the recorded music played on Dominican radio was from elsewhere in Latin America, and so among Dominicans interested in Dominican music, Guandulito enjoyed a captive audience. Through talent and official favor, Guandulito soon rose to become one of the most prominent Dominican musicians of the period.

After Trujillo’s assassination in 1961, Guandulito signed on with Radhames Aracena, a promising young producer who was to be critically important to the development of bachata. With the opportunities and new freedom that immediately followed the fall of Trujillo, Aracena created a radio station and one of the Dominican Republic’s first private record labels, named respectively Radio Guarachita and Discos la Guarachita. Aracena and Guandulito had first met in 1958, when Aracena was a radio personality with La Voz Dominicana. When Aracena established his record label, Guandulito became one of the first to sign on, and thus gain simultaneous access to radio and music distribution throughout the country. Aracena also secured distribution rights to Guandulito’s older recordings.

Many of Guandulito’s most classic recordings were made with Discos Guarachita. But at the same time that he wrote and recorded these classics, his career suffered a serious setback. The fame and popularity that Guandulito earned during the Trujillo era became a liability in the years that followed the dictatorship’s fall. Many of the same people that had applauded him now resented Guandulito for his former songs in praise Trujillo. “My accordions were broken, and I was even beaten for having sung for Trujillo” said Guandulito in an interview. 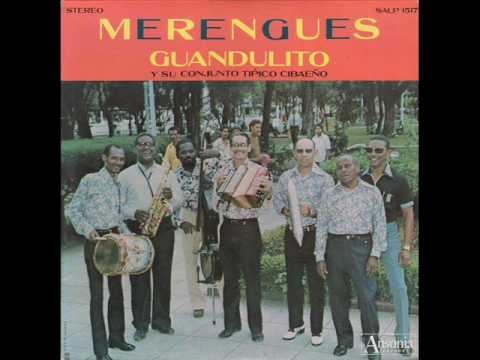 Years later, Guandulito was able to regain some of his fame, and many of his legendary recordings (and some new ones) reached the Dominican people once again. But Guandulito received little compensation for his recordings, and faced stiff competition from younger touring musicians such as Tatico Henriquez, El Ciego de Nagua, and Paquito Bonilla.

Added to these problems were Guandulito’s health issues, which came with his old age. Guandulito, his wife Jovinita and their ten children lived together in one room in Santo Domingo. Despite a meager pension awarded by the government, the family barely had enough money to eat, and ended up pawning Guandulito’s accordion and selling Jovenita’s clothes in order to make ends meet.

Guandulito died in a Santo Domingo hospital in in 1978, poor and alone. His fame continued to grow after his death, and his recordings are now considered some of the most original and powerful in the history of Dominican merengue. Regrettably, Guandulito’s contribution to Dominican music was less appreciated while he was living.

In his recording contracts, Guandulito relinquished all rights to his music and compositions, and the royalties they produce. Until recently, this was the usual practice for Dominican musicians. Towards the end of the 2000s, Jovinita Mejía and their youngest son Marcos Yaroide (a popular Christian Singer) made this issue public. They have asked the National Office of Copyrights for help, but as of yet haven’t received any.