In a career beginning in the 1950s and continuing into the present day, Cuco Valoy has known success singing son, salsa, merengue, bachata and bolero, in addition to playing and singing Afro-Dominican folk styles like palo. Not only has Valoy’s career run the gamut of Dominican musical forms, he has also seen the music from the vantage point of singer, percussionist, guitarist, producer, and even on-air disc jockey. Known chiefly as a vocalist, Valoy recorded both the rhythm guitar and the bongo for the son duo Los Ahijados which he fronted with his brother Martin, and often played piano or bass on his later merengue recordings. Many of the early merengues de guitarra recorded by bachateros like Edilio Paredes and Ramon Cordero featured Valoy on tambora. As a producer he worked with pioneering musicians like Bernardo Ortiz and Antonio Gomez Salcedo, and he was recognized by no less a figure than Radio Guarachita founder Radhames Aracena as having been the first radio disc jockey in the Dominican Republic to play bachata on the air.

Valoy was born in 1937 in Mano Guayabo, near the capital of Santo Domingo.
The Dominican Republic is home to a thriving culture of soneros, from Santiago to the capital, and Valoy grew up in the middle of it. Cuco’s father wanted his sons to be professional musicians, and though only a carpenter of humble means, he had Cuco study music at El Conservatorio Nacional de Música de la República .

Cuco’s professional career started in the late 1950s with Los Ahijados ( The god-children), a traditional son group he formed with his brother Martin and named in response to the great Cuban duo Los Compadres (The Godfathers). Without a doubt the most commercially successful Dominican soneros ever, Los Ahijados enjoyed hit after hit until Valoy turned to salsa and orchestra merengue in the early 1970s. 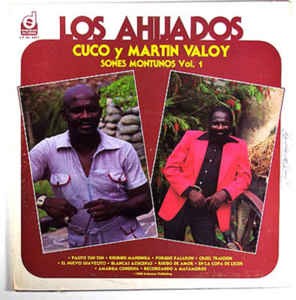 Cuban music exports dried up after the arrival of Fidel Castro in 1959. Inversely, in 1961, three decades of restrictions on Dominican music were lifted with the demise of dictator Rafael Trujillo. For Dominican son lovers, Los Ahijados filled the vacuum left by the silence from Cuba. Valoy was conscious of this, and in many of his songs he makes references to the great Cuban soneros of the past, artists like Miguel Matamoros and Antonio Machín. Some of the duo’s most memorable songs, like “Vaiven” and “El paso de la jaiva” have become standards in the international son repertoire.

The success of Los Ahijados left Valoy with the resources to invest in his own record label and radio station. Soon after the death of Trujillo, a wave of migration took place from the countryside to the city, and the capital’s new residents brought with them their love of guitar music; the result was the Dominican variant of bolero which has come to be known as bachata. It was in the midst of this wave that Valoy began to work as a producer, and some of the best loved of early bachatas were sung by his artists, songs like “Dos rosas” by Bernardo Ortiz and “El interno” by Antonio Gomez Salcedo. Apart from these singers Valoy’s studio was the first to employ legendary guitarist Edilio Paredes, who Valoy calls “A musician of extraordinary importance.”

As he sold copy after copy of “Dos rosas”, Valoy came to realize the commercial potential of bachata. At a the time Radio Guarachita, which was to become the primary broadcaster of bachata in the Dominican Republic, was still playing strictly imported bolero. Valoy blazed the trail for Guarachita, playing bachata under the on-air name of “El Suki Suki sabroson”. He also began to record bachata himself, under another pseudonym: El Pupi de Quisqueya. The boleros recorded by El Pupi during the 1960s are some of the most exquisitely crafted songs ever made in the bachata tradition; and many of them are classics. The best known of these, “El bardo”, is a cabaret bachata about a bohemian who no longer believes in love or in God, and describes his life as a puzzle which has no solution. In fact most of “El Pupi’s” music is in the cabaret vein, and includes a criolla, “Mariposa nocturna”, which speaks the lament of a man hopelessly in love with a prostitute.

Aside from his pioneering radio work, Valoy helped establish the careers of some of bachata’s most important singers. Directly or indirectly, Valoy was responsible for introducing the world to bachateros like Ramon Cordero, Berndardo Ortiz, Augusto Santos, Edilio Paredes, Victor Estevez and Melida Rodriguez.

Just as his sense for the popular taste led Valoy to produce and record bachata as its star rose in the 1960s, it also lead him to leave bachata for orchestral music at the beginning of the 1970s. As Dominican guitar music became vilified by the country’s elites and increasingly viewed as disreputable by the general population, Valoy transitioned from the guitar based son and bachata of los Ahijados, to orchestral merengue and salsa. In 1975 Valoy definitively broke with Los Ahijados and formed an orchestra, Los Virtuosos, with his son Ramon Orlando Valoy on piano. The LP “No me empuje” is one of the group’s best known works, and it features the kind of politically insightful songs that would come to define much of Valoy’s music. From the time of the 1965 Constitutionalist Rebellion against the Dominican government and US troops, Valoy had staunchly defended the rights of the most marginalized segments of the population, and he continued to take this stance in the merengues he recorded during the 1970s. Indeed, his feud with president Joaquin Balaguer, who had been the right hand man of the dictator Trujillo, lead Valoy to a voluntary exile, first to Cuba and later to the United States in 1990. He refused to set foot on Dominican soil until after Balaguer’s death in 2002. Los Virtuosos, who came over time to be known as La Tribu, produced not only groundbreaking merengues but also salsas which would go on to become classics. The best known of these is “Juliana” (1978), a salsa whose music has a strong feel of son and whose lyrics could just as easily be those of a bachata. In it, Valoy decries a woman who he loved and worked to provide for, but who after obtaining a US visa, left for New York and forgot him.

Valoy’s importance as a salsero and merenguero lasted well into the 1990s. In more recent years he has returned to the music which he describes as his real love, traditional son. Some of his latest recordings have been made together with his brother Martin, his partner from Los Ahijados. Ironically, Valoy’s most significant legacy may be in the contribution he made, as a producer, singer and radio personality, to solidifying the foundations of bachata, the genre with which he is least associated. What is beyond doubt is that the music of the Dominican Republic, salsa, merengue, bachata and son, would have had a different face if not for the four decades of Valoy’s contributions.